Digging in some old boxes in the basement, I found 1/35 scale tank models I did some decades ago. They are for the most part beyond any hope of restoration, being badly damaged and missing parts. I kept these just for the pieces I could eventually scavenge for scratch-building.

This is the kind of heavily damaged tanks I found. The KV-2 I am currently working on was in a state similar as this poor Panzer IV 😦

A few tanks however are in better shape (barely) and could potentially be restored. This is the case of the WWII Russian KV-2 tank I decided to rescue.

A few parts were missing (the barrel, handles, tow cable) and the paint job I did on it years ago was awful, but nothing was truly broken. So, I saw some potential and went to work. The goal was also for me to practice some weathering techniques I have acquired in recent years on an armoured vehicle (I haven’t weathered a tank since the 90’s).

The pics below give an idea of my progress. The turret is pretty much done (just a few minor touch-ups to do) but the tank body and track still need some attention: paint chips, rust, mud etc. 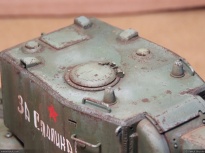 I am quite pleased with the results so far, given the fact that this model was for many years just a useless piece of plastic in a spare parts bin.

I plan to put this big guy on a roadside diorama, a muddy road in the area of Kursk.