Almost done! Some minor details to fix: add an antenna, add some mud on the mud scrapers near the drive wheels and glue the tracks to the wheels.

I don’t think I will be able to create sag in the tracks since they are too tight… I should have known better not to glue the front wheels, wich act as track tensioners.  Once the tracks will be glued to the wheels, at least they will stop “levitating”… 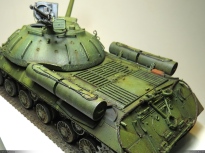 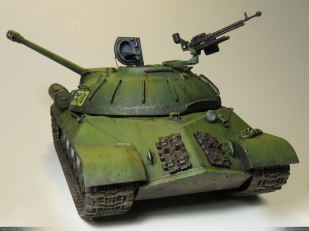 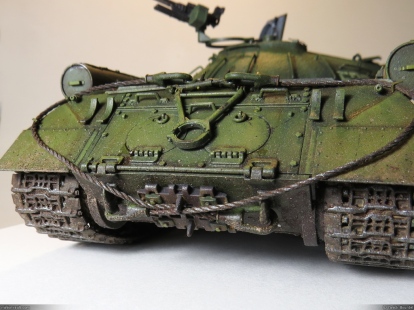 My little E-10 diorama is done! I added a figure of a tank driver (Tamiya) and a rusty barrel to complete the composition and add a touch of color. 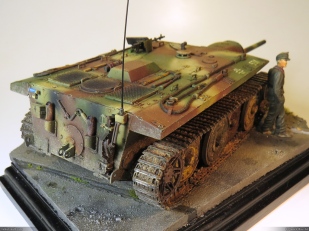 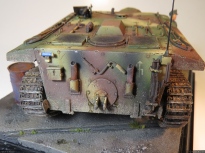 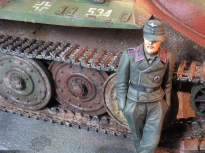 I decided to finish the IS-3 tank from Tamiya I built a while ago.

As soon as it was on my workbench again, I thought it was too dark and not “yellowish” enough. I was afraid further weathering would make it even darker and conceal the details. So I decided to do a bit more highlights.

I think its color will be much more suited now for weathering and washes.

I also decided to go for a small Budapest 1956 Diorama instead of the original Berlin Victory Parade 1945 I was planning to do, so I will be able to put the model amongst debris and barricades (also this gives me more latitude for heavier weathering, since the tank would have been in service for 11 more years by 1956). The Hungarian insurrection of 1956 was pretty violent, the streets of Budapest were a mess and a number of JS-3 were involved (event destroyed!).

The small diorama for my E-10 tank is almost completed. Yeah!

I took some photographs during the build.

I got inspired by some pictures I saw of the Reichsautobahn and a tutorial from AK Interactive on Youtube.

I don’t have any AK’s modelling products, but I thought I could replicate the same effects with my own stuff.

In case you’re wondering, this project was super-quick! It tooked only 2 days to build this little diorama. I think that without the overnight required for the drying of the ground material, it could have been completed in a single day. Which is sad, in a way: I love building dioramas. This one was too quick to build…  😦

I added a description for each picture, to explain the process. 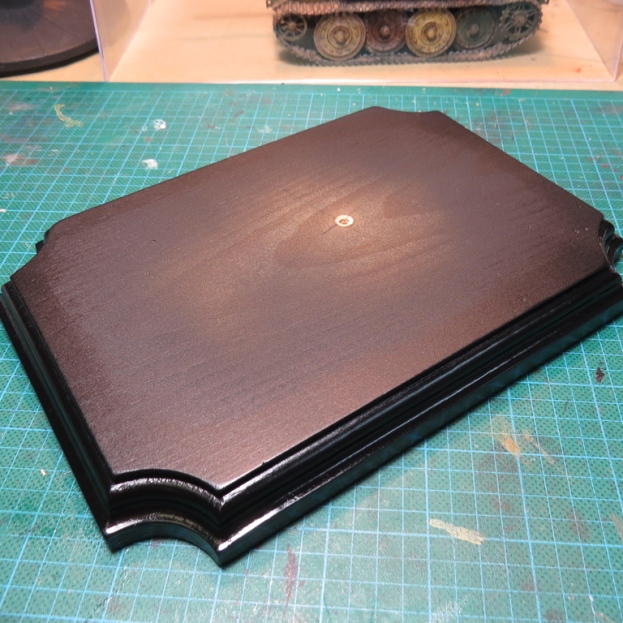 A small wooden base I had lying around. I might repaint it later, since I don’t like its glossy finish.

A paper template, to plan the layout.

The main elements of the diorama are placed on the paper. to visualse the composition.

I traced with a pen the position of the elements on the template. “A” is for the main attachement for the tank, “F” for figure, “D” for drum, and “W” for water. 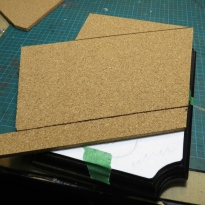 I used cork sheets for the road surface, since the texture of it is quite close to the texture I want. Plus, it is quite easy to damage the cork and make it look like broken concrete or asphalt.

See? Quite easy! This little dent will be one side of the small water pool.

I glued the cork on the wooden base with my hot glue gun. Quick and simple.

Prior to gluing the cork in place, I scratched and dented the surface for better adherence.

I’m using wood filler as the base material for the ground work.

Once it was a bit dry (after a few hours) I used a smal brush and tools to give the paste a earth-like texture. The wood filler was applied quite thick, so I had to let the whole thing set overnight. 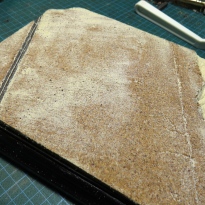 The surface of the concrete road was brushed with a mixture of glue, wood filler and fine sand. I brushed this liquid mix leaving some brush strokes to simulate concrete road texture. A strip of foam was added to represent the asphat expansion joint between the concrete slabs. 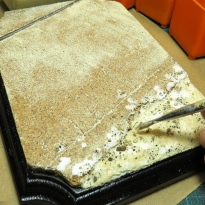 I used a mix of Liquitex Ultra-Flat Medium, Mod Podge and water as a fixative after the PVA was dry. 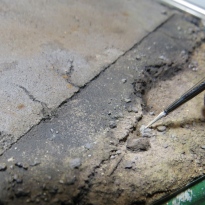 First, a wash of earth brown and sand colors. Followed by a dusting in various pigments. The whole thing was then held in place with fixative. Then I painted the rocks various shades of grey and beige to make them pop.

The bottom of the water hole was painted a darker shade of brown. 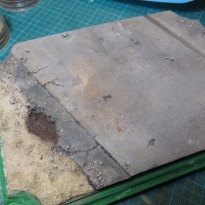 Stains and dust details on the concrete surface…

Airbrush time! Two darker line were made on the concrete to represent the trails left by rubber tires on the surface. A white line was painted (actually, it is more a pale grey line as pure white would have been too bright). I also dusted the whole surface with just a little bit of Tamiya Desert Yellow (XF-59).

A little bit of black was painted in the cracks and with a small sponge dipped in gray-brown, I added the chipping for the white line.

Vegetation is a mix of various small plants, roots and grass turf I had. The larger plant in the foreground is handmade (tutorial comming soon, maybe…)

Another view of the vegetation. The small leaves are basil leaves.

Water effect (Woodland Scenic) was tinted with beige acrylic paint and poured in the hole. 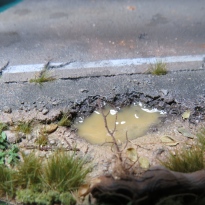 I might have to pour a second coat on top when this one will be dry, because the suff tends do “sag” in the middle (it contracts when drying).