I had an idea for my future Soviet BT-7 diorama: I want it to feature an abandoned german tank (stuck in frozen mud and snow maybe).

I needed a small tank, so it doesn’t grab all the attention away from the soviet tank. A Panzer II would be just perfect.

Since It will most likely be beaten up, half buried in mud and snow, I was reluctant to purchase a brand new model kit for this project.

So, here’s my idea: I happen to have an old broken and badly painted Panzer II in my spare parts box. I will fix it, repaint it and weather it appropriately.

So here is the poor little guy: painted in a disgusting rose-beige color (what was I thinking?), with dark grey “camouflage” and a lot of pure silver paint for chipping.

It was also covered in dust and sand (an early attempt at weathering).

Oh! And the main gun is missing…

I started by cleaning it in soapy water (using a toothbrush). I used some plastic pieces to fill the holes and the underside of the fenders. I drilled the hole in the machine-gun and used a bit of filler and sanding here and there.

It is far from being in an acceptable state, but I find it strangely satisfiying to fix this old piece of plastic.

Anything I do to it will improve it: It sure can’t get in a worst state 🙂 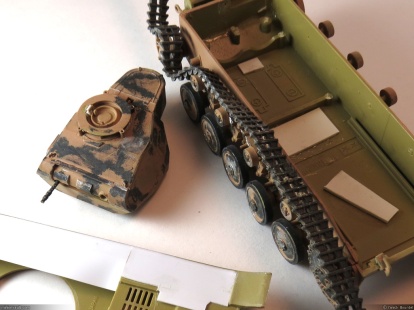