It’s a really nice model, with very good details. It includes photo-etched schurzen. It also includes a metal barrel but since the end of the barrel is still a plastic part, I figured It would be easier to glue the plastic barrel instead. Once painted, it will make no difference.

This version of the Jagdpanzer  was a pre-production unit, mostly used for training, but a few were used with Panzer Lehr Division in 1944. Some with zimmerit, some without.

I think I’ll go with the Panzer Lehr version and a standard 3 color camo, no zimmerit. 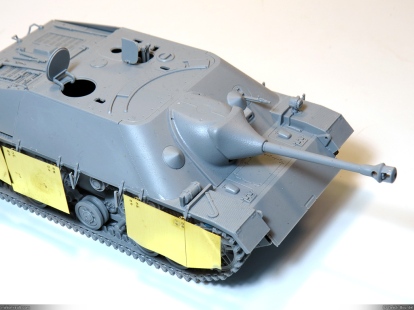 Distinctive rounded glacis on this version: the later models were more angular.