Right after Christmas, the urge to build a new model was really strong for me, but I wanted to build something simple and quick for a change.

On my shelves stood an old Panzerkampfwagen II Ausf. F/G from Tamiya. A kit produced in… 1971! The kit includes 5 figures. I only intend to use the tank commander figure.

Just to give you an idea of the simplistic, toy like nature of the kit: There’s almost as many miniatures parts in the box than actual tank parts…

Vinyl tracks (without details on the inside), molded on suspension, tool clamps that are just plain rectangles, no hole in the barrel, etc… The kit is way under modern standards and would require a tremendous amount of work to make it really accurate.

But I really didn’t want to put all the efforts (and after market products) required: I just wanted a fun build.

I decided to build and paint that little monster as is, OOB. No fuss. The only modifications I did were to drill holes in the main gun and machine-gun barrels and fill the gaps at the bottom of the hull with plasticard.

The decals gave me serious headaches: They were very thick, yellowish and did not stick well to the model. A huge chunk of the big letter R on one side of the turret even broke of during weathering. I made a Nazi flag from epoxy putty to hide this.

The diorama was pretty basic and quick to make. Again: no fuss.

The whole thing, diorama included, was built in little less than 2 weeks.

Overall, it was a fun project. And in the end, it doesn’t look so bad for such an old kit. 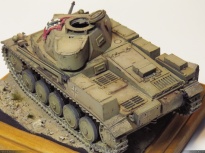