While I was pre-shading and basecoating my IS-3 tank this weekend (a post coming about that soon), I decided to pre-shade and basecoat an old model I had lying around: a Sturmpanzer IV “Brummbar” from Tamiya (a model almost 30 years old!).

Of course models made in the 80’s had fewer details than those made today. I could spend countless hours trying to improve my Brummbar and make it close to today’s standards (I was tempted to do so for a while, of course…). But in the end, I just decided to keep it like that, “out-of-the-box assembly” and concentrate on the paint job, weathering, and diorama.

I’m not a big fan of the camo pattern I used, but it seems appropriate for the time and location (Italy!).

I’m planning to use some foliage and branches to hide the most annoying details.

I’m pleased with the result so far.

Grey primer, followed by pre-shading with black, then a basecoat of Tamiya “Dark Yellow” (Dunkelgelb). Then, some highlights of a paler shade of Dunkelgelb. 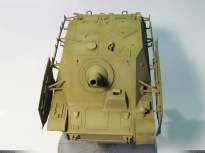 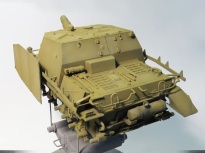 My own mix of browns here for the Rotbraun (I wanted a warmer shade, since the weathering will eventually dull the whole thing…