I started this project a little while ago, but I has been growing in my mind (dreams?) for years…

It’s THE big one! The meanest, greatest, ultimate BADASS creature in the whole D&D universe *and multiverse*: the legendary Tarrasque. 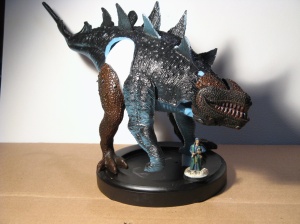 So the thing started, oddly with a purchase at a local dollar store: 2 plastic toy dinosaurs (a T-Rex and a Stegosaurus).

Toys very similar to these one… 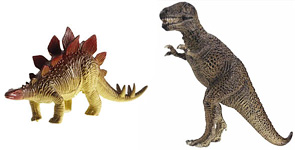 After using my good old X-Acto pal and some nails (to keep the plastic limbs from falling appart), I ended up with the rough shape for the big guy.

I used a styrofoam ball to beef up the abdomen and belly. As you can notice, the T-Rex head was placed upside down. This way, the lower jaw seems bigger and the jaw bone looks stronger. I also used the rear legs of the Stegosaurus, but turned them the other way around, so they look more like arms than legs.

For the sculpting, Ie use Magic-Sculpt two parts epoxy putty. I just love working with this stuff: it is water soluble when mixed, can be applied and sculpted like modeling clay, hardens (solid as a rock) in a short time at room temperature (in an hour its already firm), sticks to just about any material, can be sanded and painted once cured, doesn’t smell too much, and is not very expensive… it has all the qualities needed. 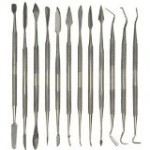 I also use a small wooden block (to flatten areas) and a small rock (pebble) to slam (gently) onto surfaces when I want a rough finish.

Screws are used to reinforce the horns. I screw them through scrap pieces of plastic, then buried the base in Magic-Sculpt putty, at the top base of the head.

You can see on this pic the armature for the horns on the lower jaw, made of different gage wires. 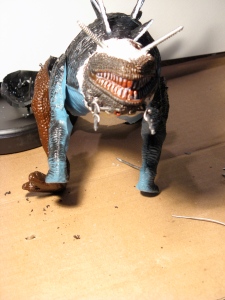 Since I wanted to have a good armature for fragile parts (like spikes and claws), I decided to experiment with plastic forks and… crab legs (real ones, carefully washed and dried of course).

At this point, the overall look of the head is ok. The horns are too large, but it is still interesting…

I also put 2 small beads on a thin wire to experiment with eyes positioning, without committing to anything at this stage. 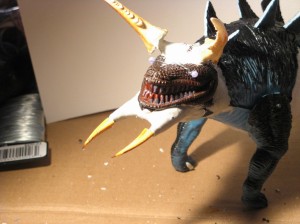 Same quick test with the plastic fork for front claws… 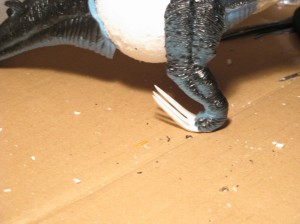 …and with crab legs for rear claws. The claws where assembled for the test with artist petroleum based clay (it never dries)… A bad idea: the stuff would prove really difficult to clean up! 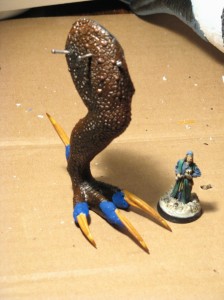 With all these tests, the overall creature starts to look more like a Tarrasque, instead of a Frankenstein’s version of Jurassic Park… 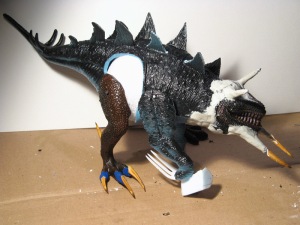